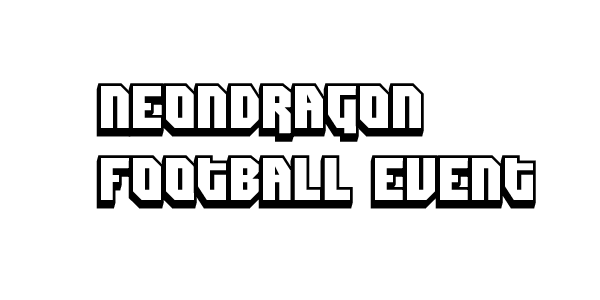 Hello, and welcome to another Football Event here on nD.

Introduction:
This football tournament wont be that many changes except that i'll be incharge of it with some other people at my side. This time you will alse be able to sign in as a team and come up with your own teamname. So yes, good luck and may the best team win.

How the games will be played
- We are going to play football matches with each team defending a goal each on a football field.
- The teams will have a total of 4 players in each team so it's 4 vs 4.
- The games will be played in 2 halfs where each half is 5 minutes long. So the full game will be 10 minutes in total.
- Each half starts with a kick off in the middle and each team gets to do at least 1 kick off during the game.
- After a goal is scored the team conceding the goal will do the kick off.
- The tournament will start will start directly with knockout stage so if your team lose you are out!
- You will play each team once, both in the group stage and the finals.
- If you win a game you get 3 points, a tie will give each team 1 point. If there is a tie during the finals then we will decide the winner with a penalty shootout.
- Each team will have 1 goalkeeper and 3 outfield players. The goalkeeper may leave the goal if desired to.
Rules
- No cheating allowed (getting a certain advantage during the game)
- Bugging the ball is not allowed, if someone does this they will recieve a yellow card and the opponents get a freekick.
- Running with the ball against a wall is not allowed either.
- If the ball goes outside the field there will be a throw in.
- If a team is not there in time they will be disqualified. If not all players show up then you will have to play with less players.

- How do i sign up as a team?
Step 1. Find 3 or 4 teammates and decide what your team shall be named.
Step 2. Decide a captain for your team.
Step 3. The captain contacts me trough forums or on steam, and then gives me the information about who will be playing for his team and what the team will be called.
Step 4. Your team should also have your own banner. More information about that below...

- If i don't find a team?
Step 1. Contact me, and i'll put you in the transfer list.
Step 2. The teams that have already have signed might lose a man or two. Then the captain has to contact me in that team and he will get choose a guy from the transfer list.
Step 3. If you're unlucky and no1 picks you i'll either mix you up with the other transfer people OR i'll put you in a random team.

- Not sure if you can play?
Then you can sign up on the reserves list. Or maybe you just want to help out in case the teams are not even.

Prize
- Depends on some people (will be posted in 1-3 days).

This seems really awesome Lappy! Good job, will definitely join. (Now I will only have to find 3 teammates

Looking for a team as I cant be bothered to make one.
Top

It's sad these events are always holding during weekends for me :<
Anyway it depends little bit what time the matches will be holding (mid day/afternoon) am I able to come or not. When are you going post the match times?

"No one dies a virgin, life fucks us all"
Top

I won't be participating since I'm not there when you hold it, but I'm willing to donate some cash to the winners.
Top

One small thing that i forgot to add, CONTACT ME through steam with the teams then post the teams here!

NETTOBEAR wrote:Looking for a team as I cant be bothered to make one.

Lien~ wrote:I won't be participating since I'm not there when you hold it, but I'm willing to donate some cash to the winners.

Aswell netto is in our team, just waiting for last guy to answer and then ill post our team.
"Donkey by L.F. Donkey" -mR#KaitoKid
Top

Damn Laprot! That looks like a funny event :D
Hope i can make it with a team :P

These users thanked the author GuuhaN for the post:
ivanici

^Inb4 this will be the winning team