Will update this thread with images etc. on Friday most likely.
This map is still in working progress but I haven't been working as much on it as I hoped.

might stick with this name, haven't found a better one yet.

So, I'll post some images of each of the areas currently available in game. The map is more or less playable now.
There is some areas that needs more work (as you will see in the pics below) though most of it is ready for testing, obviously I'll have to change timers for games since some of them might not suit a larger group of Terrorists, but that's something I'll do after a map test.

GUNROOM
Not much have change here if you compare to the "old" picture in the opening post. I did however get bored/tried to block view into other games by building a "nose" for the spaceship that is the theme, game that it blocked view from got moved and I let the whole thing stay since I don't really think removing it or keeping it will have a large impact on the gameplay. 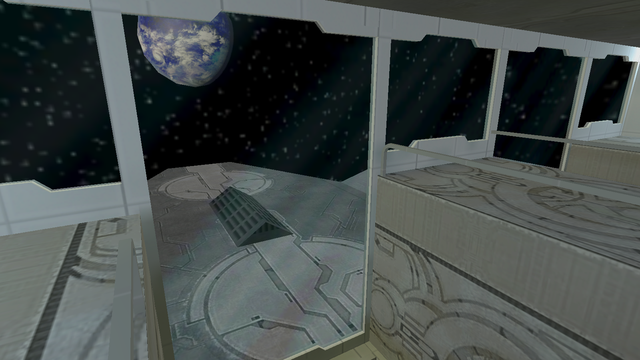 LOBBY
Couldn't find a better name so I'll just call it "lobby" at the moment, the area outside Gunroom. From here you are able to go to the cafeteria or forward to the cage area. This area is not done as you can see that I've left-over doorways and vents that doesn't lead anywhere at the moment, the idea is to either move the "ladder race" type of game to that area or place a game I'm about to make there. We'll see.

here you can see part of the cafeteria. the only way to go up to the gunroom atm is either through the ladder in cafeteria or if you bring down the "bridge" from control room, pics in first post. 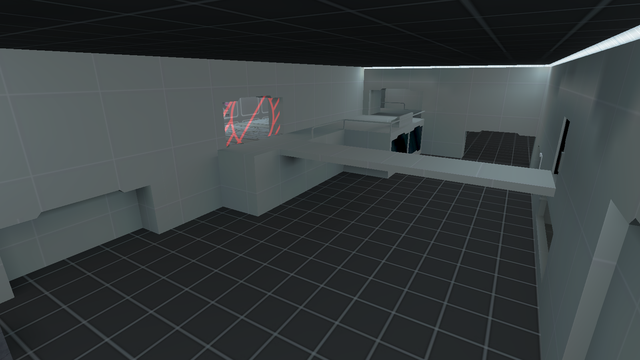 you can see the control room (above) and healing room for T (below, access through cage area) the door on the left is the only way to the escort a larger number of terrorists to the cafeteria atm, the door has buttons on both sides of the wall but with a delay before it triggers, to stop those that escape. 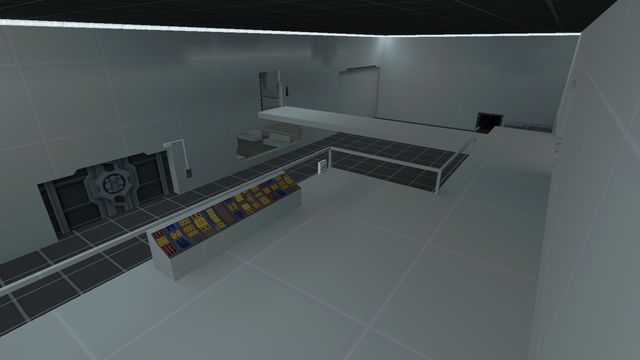 CAFETERIA
Here you got the basic cafeteria stuff (vending machines etc. will most likely be added) behind the closed door there is a "drop down" game, the player will jump down and fall towards the ground, to survive he has to aim and hit the green square that moves around on the bottom. The other "game like" area you can spot in cafeteria is a team game, (at least 2 per team is needed). Only 1 side is done in this game but it's simply just copy paste when I got it the way I want. The team that finishes first will be able to press a button that kills the opposing team. 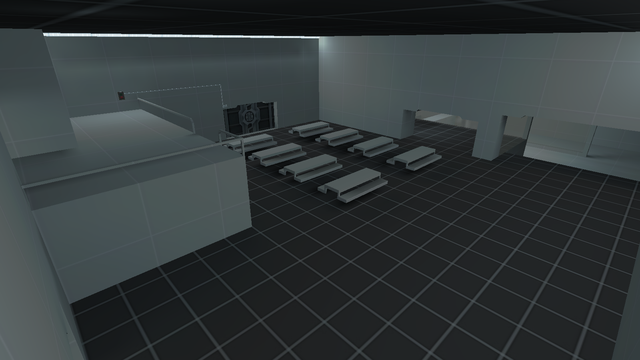 Drop down game, might be hard to spot the square but that's where you have to land. 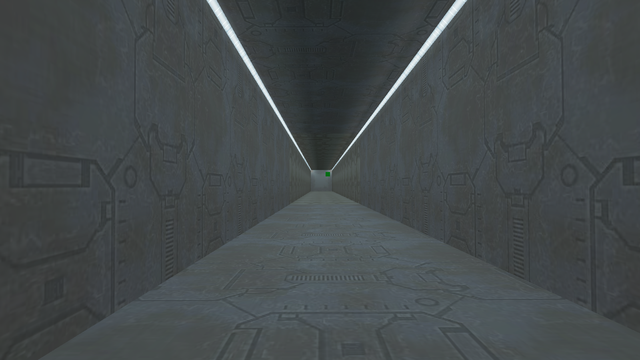 Team race. still minor adjustments needed, possibly so CT can "lock" the teams away from each other so they cannot switch side when they see they'll lose. 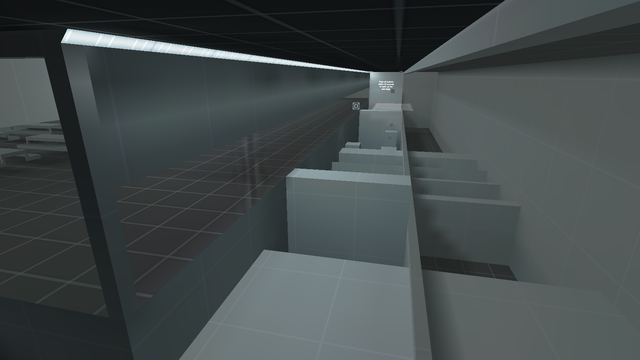 CAGE AREA
"Cells" aren't really that beautiful but they'll do the job for now, I'll prefer to keep the T's in one big room instead of making ~12 rooms just so they can get some personal space. Cage walls are shoot-through as well as see-through (for names) so far. Pool is located behind cage and you can open the door to let them straight into the pool area if you don't want to risk escorting them around the corner.

Control room has the important buttons in it, which are few. There's an elevator that leads down to the 2nd "level", CT's can go up and down on a ladder while also opening/closing and stopping the elevator whenever they want. 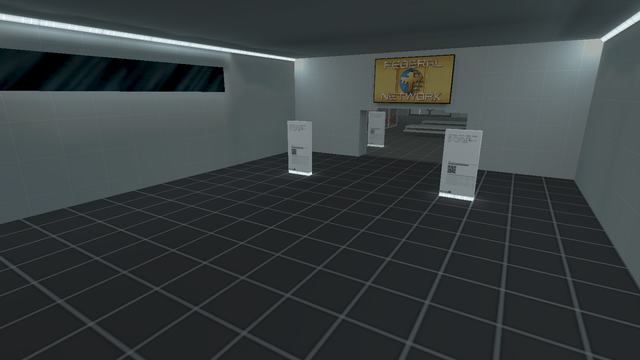 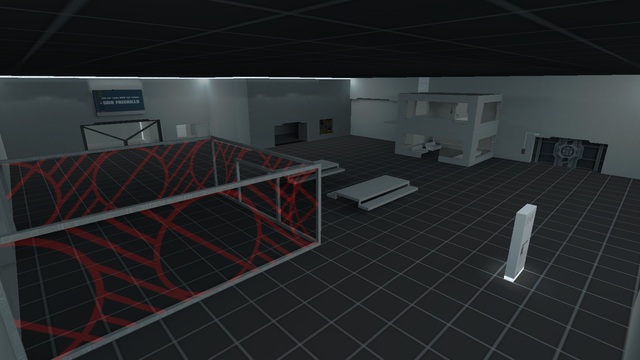 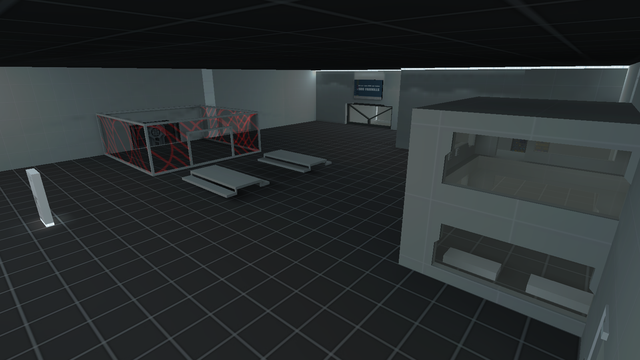 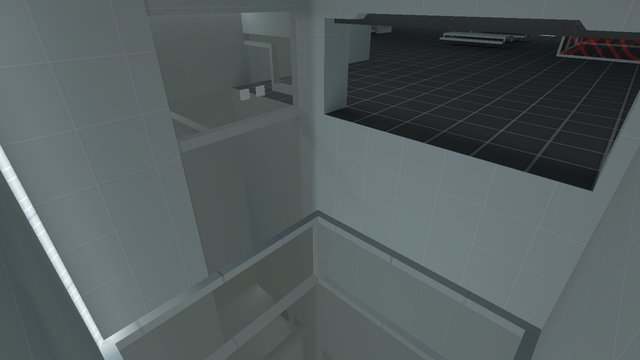 POOL
Nothing changed, added a football field near pool (a really crummy one). 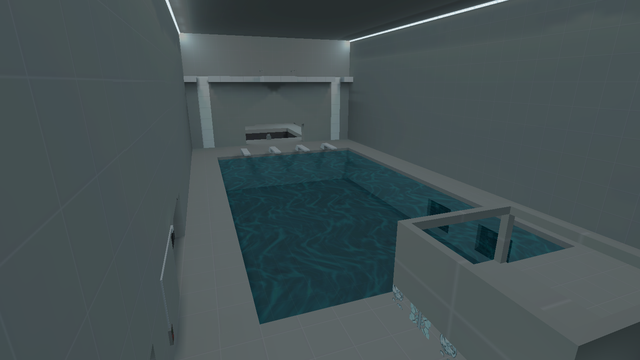 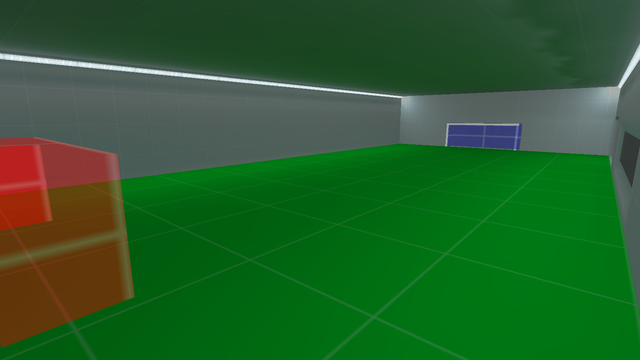 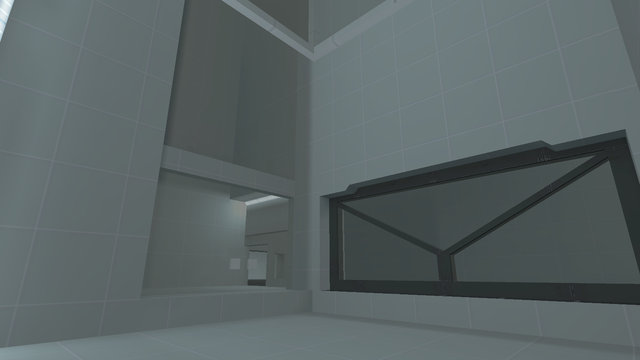 Here we go, a couple of games are down here. I'll just go over them quick.
The "ladder race" is down here, though I might move it.

CT View from above 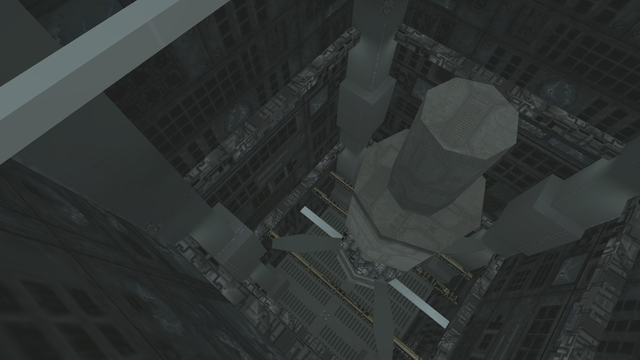 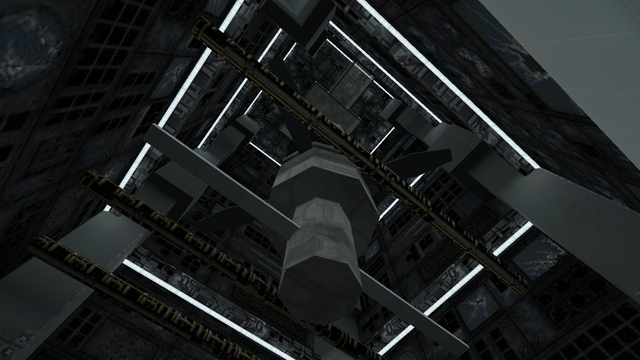 Hologram bridge, similar to the one in Halo:CE, it turns on and off and the player has to time the jumps to get over to the other side. 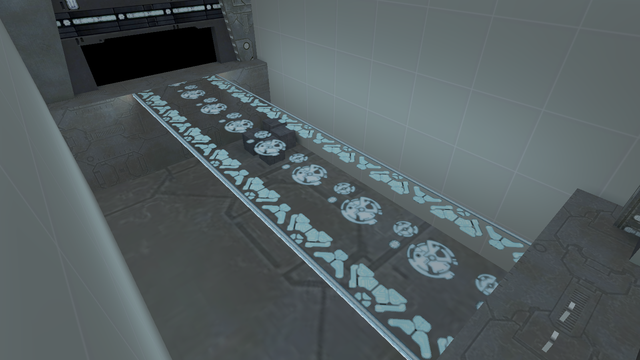 Random Blocks, atm the game just pick 1 out of 4 combinations of the blocks and removes it so they die, with "visual effect". Idea is prolly to make two types of games for this, 1 button that picks 3 on random (not at the same time) and not the same. and just one that picks 3, doesn't matter which. 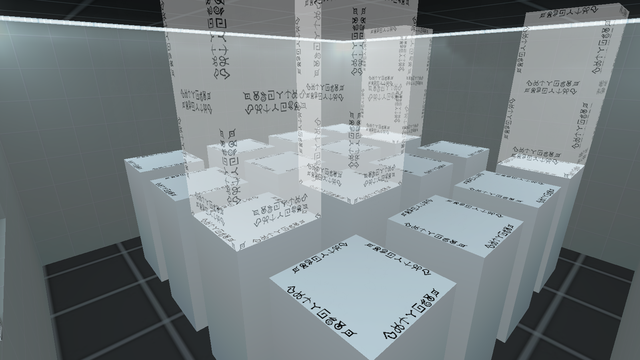 Deathrun. Not completed, the first "trap" is doors that open and close on different intervals, blocking == death. Same with 2nd trap, a moving block that the player must stand on while avoiding the lasers. 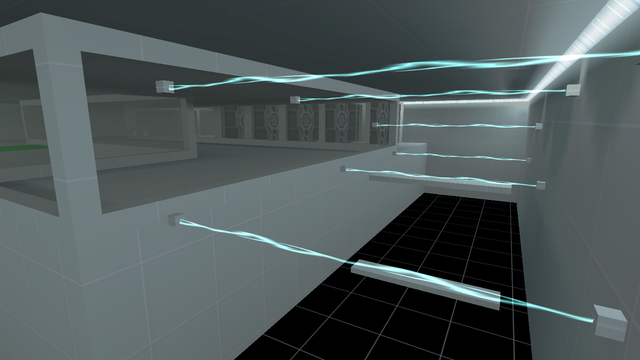 "Wind" race or w/e it can be called. a race for players (prolly up to 4 when I get around to fix this) that will have to factor in the "wind" when they go through this course, the wind will switch from left to right every now and then thus making the players lose balance and fall to their deaths. the wind will be indicated by an texture on a wall and will switch accordingly depending on what direction it blows in. 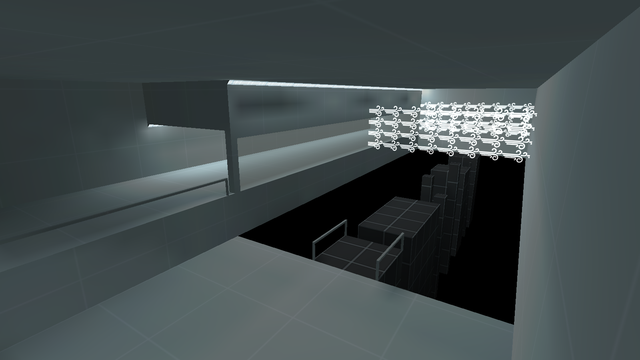 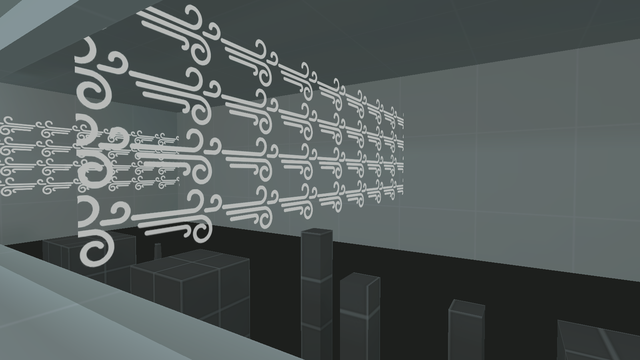 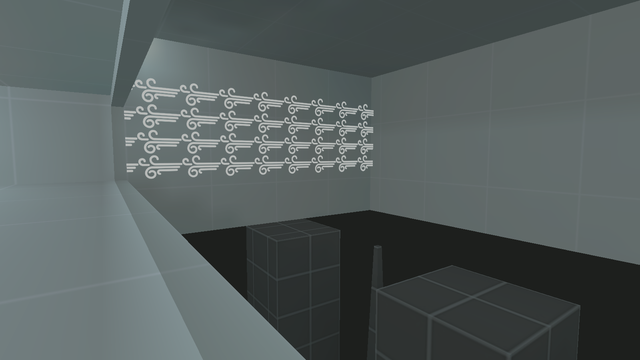 MISC
These two games are not placed yet.

Konijn wrote:Another idea I have for a game is a train race. Firstly, this can have 6-8 lanes (really depends on how many entites you use per race I suppose) but bare in mind that having as many Ts as possible use a game is good. Each T will start on his/her train which will be blocked by a barrier, the type you get in the HL story game which completely stops the train from moving until it is raised. Once the CTs raise the barrier, the Ts will race along a track, avoiding things like lasers (having to jump/duck and/or slow/stop the train), pendulums and other obstacles. When designing this game you should keep in mind that during HnS CTs will have to be able to find Ts inside the game, so I would suggest an overhead glass. 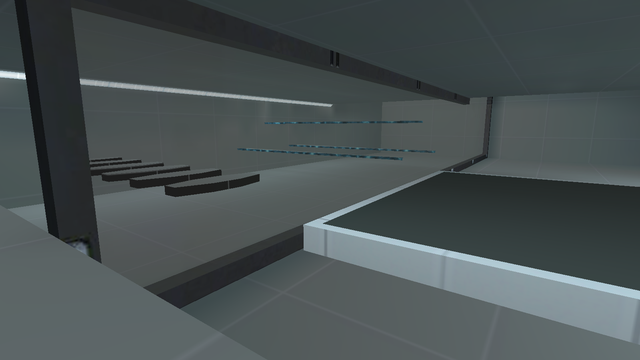 We also got the 4 in 1 game, depending on the amount of players participating, objective is to reach the button on the ceiling. At the moment I just have ideas for 1 and 4+ players, 1 being a trampoline course, 4 players will have to boost each other through walls to reach is. 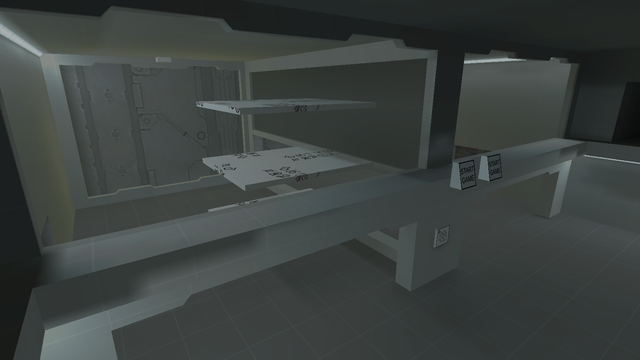 Looks astonishing, Imo it wouldn't be a bad idea to add it to JB even tho it's not ready yet.
Can you give me the download link if there is one, if there's not nvm.
Top

K0ntRa wrote:Looks astonishing, Imo it wouldn't be a bad idea to add it to JB even tho it's not ready yet.
Can you give me the download link if there is one, if there's not nvm.

He want finish it to give link , he didnt complete
Kakao as we talk on steam amazing map , futur maps

" You must do the things you think you cannot do "

Realy? Can bellive that there is mapd in cs 1.6 like that . Realy greate job perfect . I wish we add this map to jail server . The jail server realy need that . Good job and good luck to finish this map
Top

forgot to add images of slide, a HE_glass type of game + a bullpen (yet to be made).

Great map man! Really deserves a lot of appreciation, thanks for putting your time into making this map.
Top

ye ye i know to much informations, but guys look that pictures he psoted and the effort he put into it just AMAZING.
Good that my kick in your ass pushed you a bit too to still work on it to get it finished.
Can't say more than keep up your great work with a lot of good taste for enjoyable games.

Extra note: Thanks to all other map creators too like Hadi and Carefully, i do appreciate your effort you put in your maps too.

I'd love to hear from anyone who visit this thread and have played my map, if there is anything you'd like to add that you think I should change or remove, please let me know.

http://gamebanana.com/maps/192127
Test on live server looks promising and the map has been played a lot, though not every game there is on the map.
So far I've noticed a couple of things that I need to change with the map.
I will put a green √ or w/e whenever I fix something in this list.
I will not rush compile this map, hopefully next compile I do is the last one (yeah right) so I guess this map has to stay the way it is at the moment.

■ MISC
√ Add healing area for CT in/near gun room.
√ Sound "bugs" which has to get fixed.
- Possibly change the vent in cells.
- Move and/or remove the tmp in cell (lots of blocking).
- Make it harder to get the mp5 next to cell.
√ Move button that opens cage → pool so escaper doesn't press it every time (+ faster door).
√ Remove block damage on stairs. (removed them all, added ladders + door instead)
- Add different textures (very plain at the moment)
- Fix timers on games. (Holo bridge, Wind race, Random block)
- Make each game reset properly.
√ Cage walls not shoot through.
√ Remove "extra" doors, freeing up space and no block.

■ SURF
Х Remove the Easy/Hard button, the surf is already hard enough.
Х Move finish closer to the surf.
Х Upside down part, make one long surf instead of three smaller ones.
√ Fix bug where they didn't get teleported.
√ Extra finish (for those that aren't that good.)
- Add extra finish platform.

■ SLIDE (haven't really seen much of gameplay in there but...)
√ Make it easier at the end of the course.
- Possibly add other obstacles.

■ TEAM RACE (haven't seen it played yet, however)
- Make it easier.
This would affect the "press 8 buttons within 20 sec" area, I'd maybe add a ladder or something that they can climb on instead of using the trampoline that I have now, which is already hard enough with 1 player against the time.
- Make two separate entrances so it's easier to split into two teams.

■ LADDER RACE
- Add blocks to easier spot where they can climb.
√ Have door toggle open/closed.

■ LOADING DOCK/BAY AREA (or w/e) Haven't been played.
- Add multiple "games" in there as the original idea was.

■ RANDOM BLOCK GAME
√ Hollow out blocks so player can spot if THEY stand on one that will disappear.
√ Add stationary block on other side (to make races from one side to the other).

This map could be a problem for bad PC's, It will get them a low FPS.
Also compile the map with newer ZHLT(ZHLT 3.4), To get a better lighting.
Failing is not falling down, it's refusing to get back up.

need the file to test it

OnServer: DrunkeN[aT]
My girlfriend said, don't gamble. I thought ffs ofc i will gamble. Then my parents said don't gamble. Now I am clean since 02/12/2014.
Top

just played it, I was quite lost in this map didn't know how to play stuff

here a SS of a null texture

Actually, the map is pretty great. I'm sorry but it's your first time to play the map which means you don't know shit, you'd have to get used to it. It's a change since most maps are pretty similar. Maybe needs a few touch ups, but rest is okay. Good job, KaKao
Top
Post Reply
50 posts

Users browsing this forum: No registered users and 0 guests