[vote Leo]
You must take this statement at face value because every statement I make is inherently correct.

I was fully supporting leo but he turns out against me o.O. You made your 3rd suspicious move this game, hence I will change my vote.
[vote Leo]
Top


Confirmed cop says to lynch someone? I'm gon' lynch 'em.
You must disregard the statement I am currently making because every statement I make is inherently false.

I won't try to convince one anymore. And i won't admit anything.

As i can see i will die this round and it is okay.
I agree on Konijns post that i would never agree to given screenshots of my PM (role) away, that is just dumb to ask for that as a evidence Ultor and it kinda sucks. That mean Emziek as the one who got shown as a 100% villager after Ish died, could ask all allive players for a screenshot of his PM they took from the host.
And also in my opinion that this game need screenshots of/or anything to win this game is ridiculous and take my fun to be honest. And that i say as one player that normally like this game and not is butthurt or anything like that. Try to read others with their post or see some excuses or lies in posts was what've been funny for me not who make the best screenies of all like "POOO and I said this or that" look in the screenshot of convo. It is not the first time that for such things 2 mates of the same team died. But it doesn't matter i won't participate more in this game if the rules doesn't get clearly changed.
And a little bit i think this WW or mafia game died in the past tense if players joined in the game and stayed mostly AFK and for the reason that the game is messed up on things that sound not plausible for the game.
The guys that got busy and had to be AFK i understand, real life can't tell us what will happen in the future.

I'm really sorry if it sounds like im sulky,sad or mad but thats not true. I have/had many fun in this games and hope you all will/had it too.

As i can see i will die this round and it is okay.
I agree on Konijns post that i would never agree to given screenshots of my PM (role) away, that is just dumb to ask for that as a evidence Ultor and it kinda sucks. That mean Emziek as the one who got shown as a 100% villager after Ish died, could ask all allive players for a screenshot of his PM they took from the host.
And also in my opinion that this game need screenshots of/or anything to win this game is ridiculous and take my fun to be honest.


Again, nobody should be asking for or sharing screenshots of PMs from the host. That is strictly against the rules, and always has been.

From what I understand, you're being lynched because you weren't in the room you claimed to be in when emziek peeked it last night, and refused to tell him which room you were in.

This has nothing to do with screenshots of any kind -- simply logic.
You must disregard the statement I am currently making because every statement I make is inherently false.

I'm confused. Are you against taking screenshots of chats or simply angry at Ultor for asking you to quote the host?

If the first then what is really aggravating about this post?
vvvvvvvvvvv 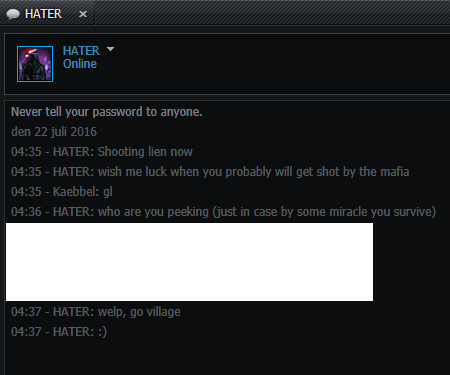 HATER is the Veteran claim I have.

I told him to shoot Lien, so keep in mind the following going into round 4:


Note: Sent to all alive players as of R3 except HATER and Konijn
///Emziek

I sent it as a failsafe incase HATER was the SK. (I had plently of reasons to believe HATER was the SK) Sending the pm out to all players in itself was a huge risk which paid of.
You must take this statement at face value because every statement I make is inherently correct.

Spoiler!
strande65: is that allowed?
Ultor: i think so
Ultor: screenshot is not
strande65: well im not sure im allowed to do it..i will ask him before i do it
Ultor: its allowed
Ultor: but not screenshot
Ultor: I did the same thing for last game
Ultor: i asked six
strande65: okay let me see how i can do it and you should ask that question poo too to see his role
Ultor: six said he doesnt know
Ultor: ask the host
Ultor: what was the most recent thing u said to poo?
strande65: i cant find the role post..i think i delted it...yes im mafia i know...to poo i didn't talked i only called him mafia today in the server and he said nah, so i called him SK then and he didn't said anything more
Ultor: so u admit ur a mafia?
strande65: nah but i know how stubborn you are and if i can't find my evidence for you...what chance i have that you trust me?
Ultor: ok lol this aint gonna help u
Ultor: you didnt delete it, u just dont know how to fake it
strande65: i never would fake anything
strande65: i hold my folder small as i can
strande65: have only the things in it where i told the admins things to back it up
Basically he started begging me to not lynch him. I asked him to give me his role PM. He said he deleted it and some silly reasons like "i hold my folder small as i can".

As i said asking for that is ridicoulus in my eyes, so could Emziek do it too after he got shown as proven villager.
How you wanna fake a host post (for your role)?

With fewer than half of you remaining, paranoia is at an all-time high. Some choose to stay to themselves, taking their meals in silence and spending the days avoiding everyone else. Others are more confrontational - with loud debates ringing through the halls as to who is guilty.

One name repeats throughout the day, each time convincing more people of its certainty. At the end of the day there are a few dissenters, but most believe !!!*-Leo-*!!! is to blame for the vicious attacks. Gathering their resolve, the move quickly to Room 10 and throw open the door, only to find Leo packing his belongings in a small bag.

"Going somewhere?" someone asks as you advance towards him. He spins around, beads of sweat forming on his brow.

"No," he stammers. "Why do you ask?" He takes a few steps back, arms disappearing behind his back.

"We know it's you. There's nowhere you can run." Someone produces a metal pipe from the hall closet and steps forward. "You need to pay for what you've done."

Another step. Without warning Leo launches forward, revealing a long knife clenched in his fist. He slashes forward, nearly catching one of you as you all pull back. Stepping forward, he eyes the group wildly, brandishing the outstretched knife.

"Fine. I'll admit it. They've not all been mine, but there's been more than enough. You should have seen their faces the moment before I killed them. The confusion, the realization - the fear. Beautiful. It -"

Leo's rant is cut short as the pipe swings and connects, first with his exposed arm, then again across the skull. The attacker drops the pipe, stepping away from the body with a grimace. You're not sure what was louder, the crack of the bone shattering upon contact or the silence that followed as you all retreated to your rooms.

---
Having made it this far, the two remaining mafia members once again rise in the night. They take their time making their selection before finally slipping inside Room 1, closing the door behind them. Emziek awakens as soon as they enter but keeps still. His hand reaches out, feeling for the gun he had found outside Lien's room the night previously. His fingers wrap around the trigger and as the mafia get closer he jumps up, points, and pulls.

Click. His heart lurches in his stomach as he stares at the gun in his hands. Again. Click.

"Everyone knows a gun needs bullets," one of the mafia members taunt, aiming their own weapon at him. Emziek barely has a chance to look up before he is shot dead.

As more bodies pile up, you begin to store them in unused rooms. Due to the stench alone, Rooms 4 and 5 are now closed.

//An empty room will exist for two rounds then it will be closed. (Remember if a player is an a room when it closes, he will be moved to another available room.) Once a room is closed, it is unusable for the remainder of the game.
Top

1 is the sniper and 1 is the spy. I'm guessing Pr0Gr4mm4 is sacrificing his teammate to use his extra shot this round. We still have 2 days so plenty of time before conclusion.
Top

GGWP all and a wonderful death i took WaywardVole, thanks for that

Have fun all and good luck !!!

There are 2 mafia remaining and 3 village. By far ultor and hater are confirmed village (hater is the vigilante, right?). So, lynching programma/panda is the best option for now. If, however, I get lynched it will make things more clearer about the mafia so I got no problem getting voted now since the village will win anyways.

EDIT: If I get shot tonight, programma and panda are mafia for sure.
Top

Users browsing this forum: No registered users and 60 guests