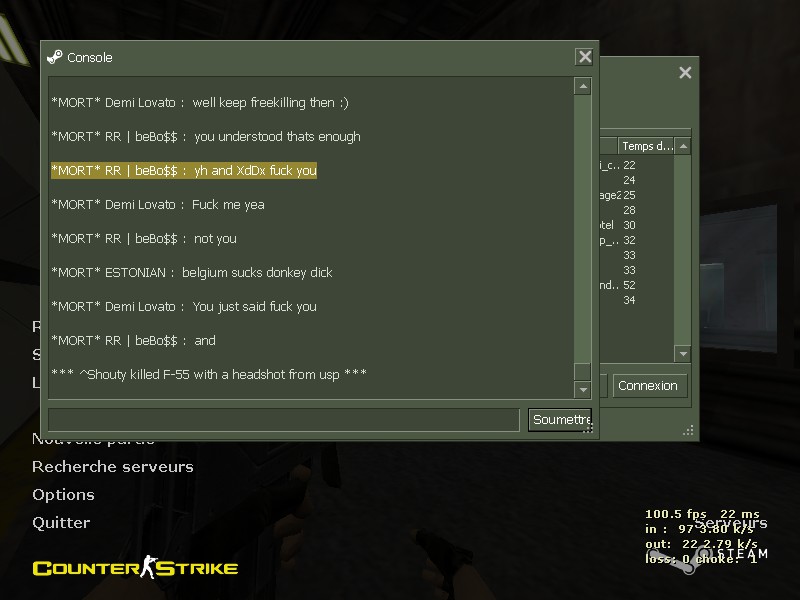 Schwein Hund is some German. Seems to mean literally : 'you pig dog'. Dunno if there's a more accurate translation for this -.-

Facts noticed : minor and heavier insults, threatening to freekill, actual freekill (no real proofs of that as it's TTT - except his ammount of karma in 3rd screen I guess, so just saying but don't take into account).

Screens are not in chronological order (wasn't paying attention at first). So that's how the story goes: a guy (innocent) killed beBo$$ (who was a traitor) and he went berserk towards the guy, accusing him of freekilling (which is quite funny). Then, it went on. He was asked to chill a bit (I asked him too) but oh well, see the screens. In between that he freekilled this particular innocent, claiming it's payback. He also freeshotted me a bit, but no harm.

Appart from that, I didn't catch everything on screens I think (when I joined, this guy was already quite on fire), but oh well. You're the judges.

*** EDIT***
Posted this in the Jail section. Dunno if it's where it should be, but I saw another TTT report in there, and I read somewhere that TTT was somewhat linked to JB. So yeah.
"I'll be going now. I'll come back when it's all over" - Aerith (Final Fantasy VII)

I didn't find the content 'wauwing' but I have warned this particular player quite often in the last few weeks hence why I decided to accept it.