I am the 2nd deputy and emziek has received wrong information. I peeked blaze in R1 and that is why lawliet tracked me to having targeted him. Blaze did not return any result because he died. Which means I am either normal/insane deputy. in R2 I have peeked Emziek and he has returned as not mafia. It's a 50/50 coin flip either way, but if he is lynched then we can confirm what type of deputy I am.

If you're the deputy, why are you voting yourself?
You must disregard the statement I am currently making because every statement I make is inherently false. 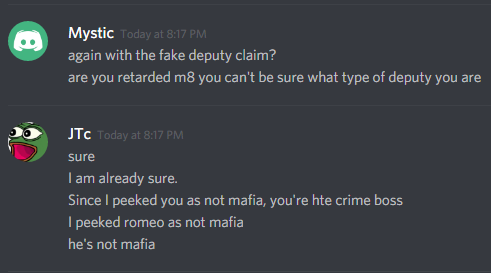 GOTTEM
You must disregard the statement I am currently making because every statement I make is inherently false.

Rhetorical questions people, aimed to show the flaw in his logic, also he's cutting out the part of the convo where I say that to frame me with such a silly 2-line snippet.

nope, he's actually mentally disabled, not taking into account he could have just peeked 3rd party and 1 mafia as the insane deputy. That is a shitty ass risk and I got my ass plowed for even suggesting playing it like that, but now that he conveniently has those peeks and risked coming forward it is okay? what in tarnation?

Freddy, The0Dominant, we'd like to hear more from both of you. Please weigh in.
You must disregard the statement I am currently making because every statement I make is inherently false.

who edited my excessive xd's

I dont believe JTc. He claims that he peeked Mystic r1 and he found out he was Crime Boss, yet he didn't speak about it to anyone. He fake claimed last game too, he never claims villager. He always claims a power role which is smart but it gets him in a lot of trouble.

My theory is that JTc just randomly picked Mystic round 1 after HATER, he would claim that he peeked the person whom he voted against round 1 and round 2 too, especially after claiming that he is deputy, because then it would make sense to people. He claimed to have peeked me second round which he had posted publicly which if he is a deputy proves me to be a villager, but if he isn't then it was just to make me go with whatever he says and make me believe the Mystic theory. He would totally pick me because I am the less experienced out of all players thinking that I wouldn't notice.

I AM OVERTHINKING IT AND THIS IS ALL FALSE.

Now when it comes to me, I am a villager. Now you can lynch me, not a problem since you have HATER going against me and Emziek who are the most experienced and trusted players by everyone. I will admit, there is a bit of fishiness to me and there is also rhetoric problems maybe I should study English more back to the point, there is a very slim chance that I am mafia.
I am not trying to convince anyone of anything, each of you had a mind which you can use.

Lynch me and see what happens.

I did because you are breaking the forum layout.

I did because you are breaking the forum layout.

Fuck this forum
https://goo.gl/images/LrY6re
Now relevant to the forum as well as Patrick
You must take this statement at face value because every statement I make is inherently correct.

Mystic is all over the place ... first defending Numble so hard then voting himself then claiming he is the deputy.
man that serious bullshit.
Top

Can I get a hug?
Spoiler!

Romeo wrote:Can I get a hug?