Hello there Flath! I didn't expect you to apply for a position in the zombie team. Don't see that as a con because I would myself want to see you as a zombie member. You're quite Active aswell as a mature person. You got the age at your side, your English is perfect, and you're a social person in-game. I'll give you a YES.
Top


So, I'll say YES, Good luck hope you to get it

This application was clearly comming and I decided about a week ago I would reply when it did.

First of all im surprised you applied for zombie instead of jailbreak since everytime I join JB you are there, same goes for TTT. I check ur playtime for the past month and its a sick amount of 230hours+. This is divded in 140 hours of jailbreak and about 65 hours zombie and rest is scattered over the others. This strikes me as odd, maybe you could enlighten us on this point?

As for your time played on jail, granted its a lot per day but its been such a short period. Your presentation thread is about a month old and thats a short time to get to know the community well.

So those are my reasonings for a no from my side, but as you stated in your application if this gets declined you want some insight on what to improve so here goes (I dont know about zombie so my improvements are from a jailbreak point of view):

- You want to do to much. I see you comment on everything people do and say in the server. Normally I would commend people for moderating, since there is a lack of it. But as soon as someone say "fuck" or "shit" you tell them to mind their language. As someone who is a new player to the community that might turn out to be fuel on the fire and just lead to more harassment, which in the end you can't do that much about. I would suggest you observe, maybe take a few screenshots and when things really get to a point where its not acceptable (thats not after the first thing) then step in and ask them to tone it down. If they don't ask a member or make a report on them. This will show you less as a "mr know it all" and more as someone who keeps the server clean.

- I've seen you blame your teammates for stuff that you do. For example your out of position as ct and die then go "CT's what the heck" in chat. It's not that great.

- Start commanding in CT in jailbreak. I will always give you a no unless you change this. Nothing personal but I despise those useless members that don't, in my eyes they have absolutely 0 to contribute in the community (and from my point of view those that did make the team don't add anything).

- Apply for the server you play the most in. Don't kid yourself into joining something cuz its easier, it wont help you in the long run.

- maybe most importent make sure nD is your home and it feels like that. Get familiar with the community/forums and get a good name for yourself. Make sure your next application is 90% yes / 10% no, this way the community will accept you as a member (and not just the admin team).

These users thanked the author Jellow for the post (total 3):
minna, wei, Kratos

Humm and Alpha: Thank you for your support !

Jellow: Thank you for your honesty. Concerning my zombie's application, i think i'll be far more usefull in zombie so even if my application is declined. I will still try to be a zombie member in the future. As far as commanding is concerned in jailbreak. I decided i'll command in one week. I have now enough knowledge and experience to start commanding. I'll try to improve the cons you have told me though.

I will not list my pro's and cons, because that is not how I roll.
I will give you a mere NO because of this screenshot alone. 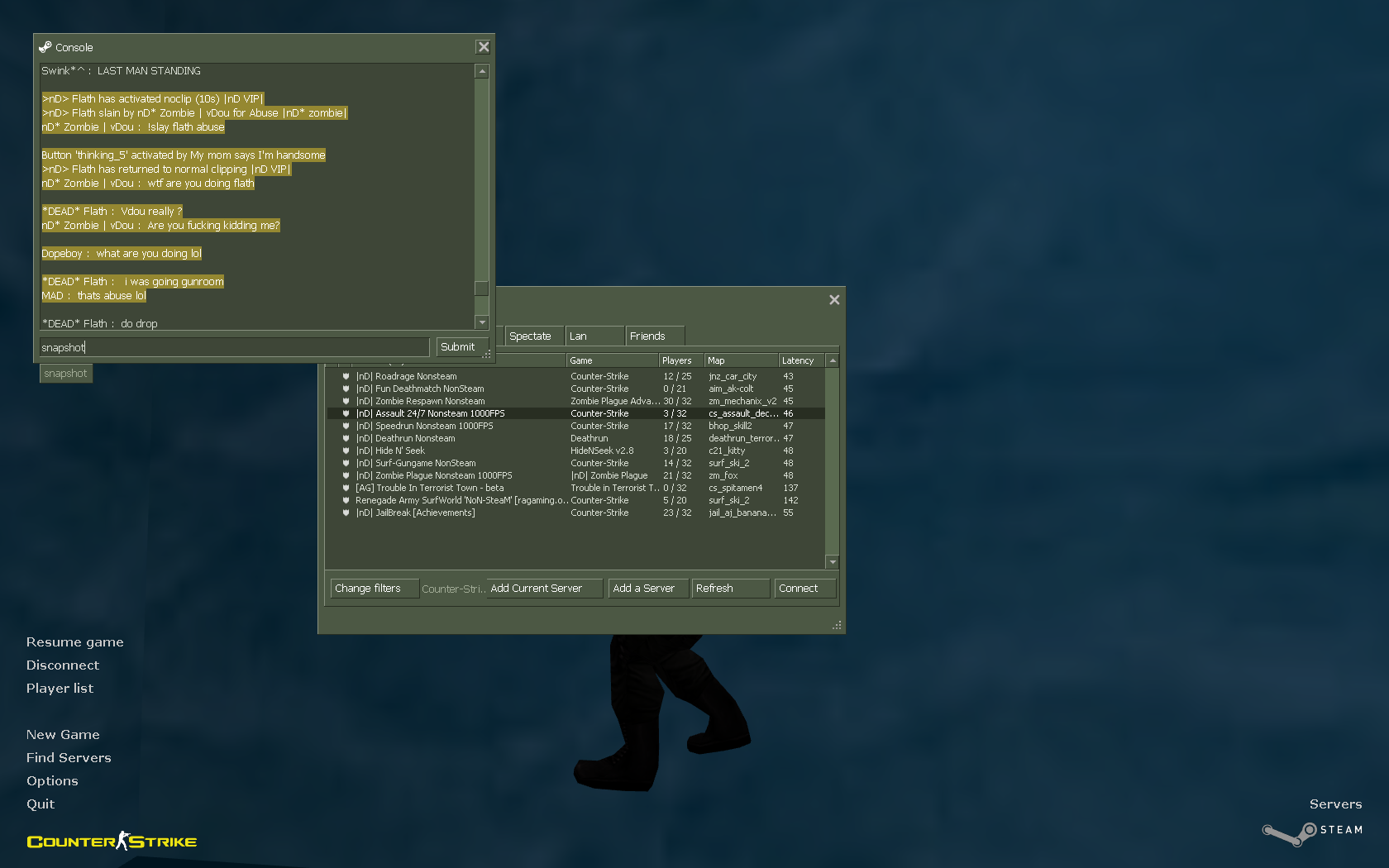 Here is the names of the people who were there when it happend. 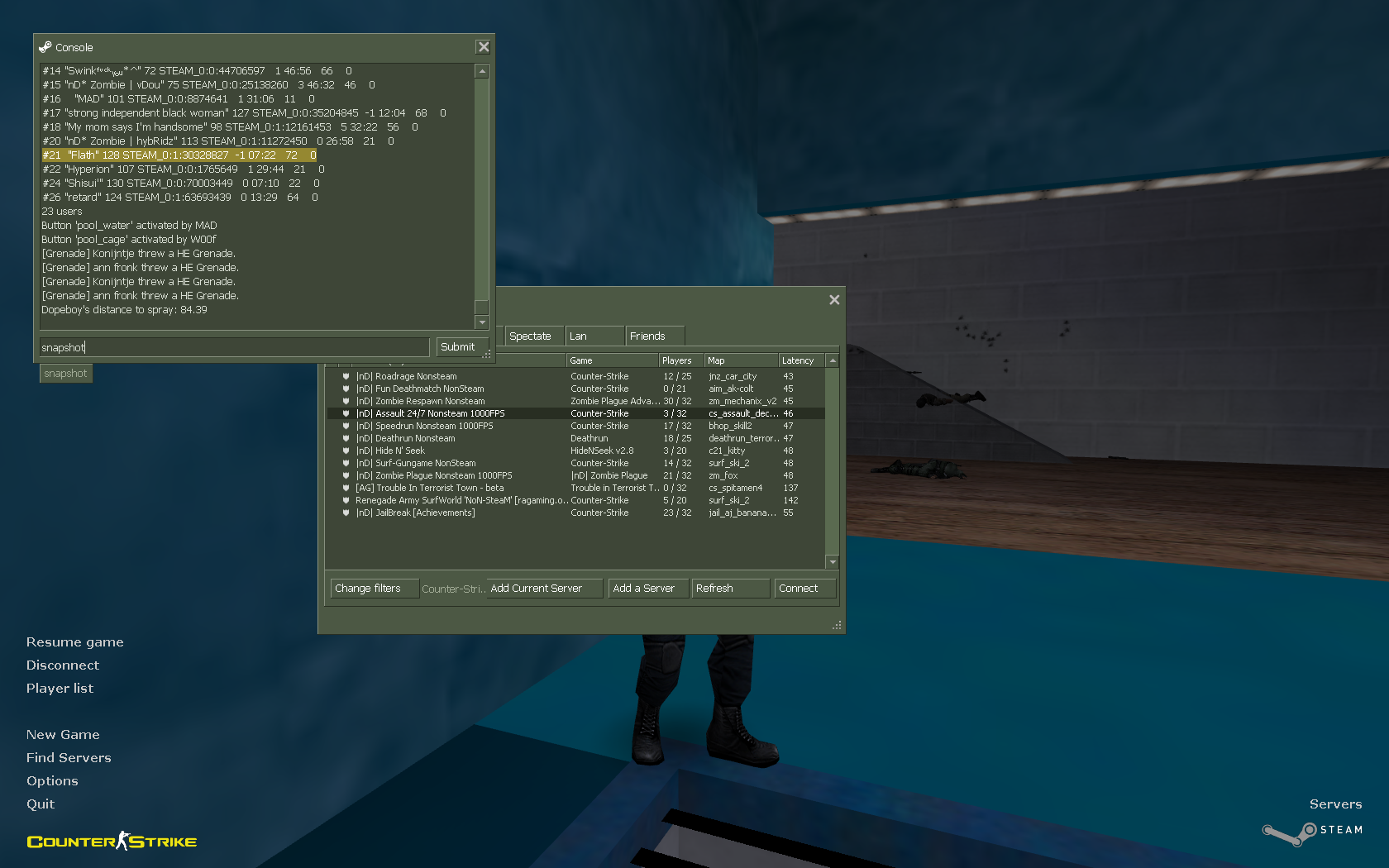 (Picked up a MAC-10 close to the Dice Game, used Noclip to get into gunroom. Had to slay him for abuse.)


I am not here to talk trash to you on your application, but from my point of view, you have been abusing your VIP powers way to often. Who knows what you would do if you became a member?

I've also seen you twice trying to votekick people for no reason when there was members online. Remember that one time on Zombie where you wanted to kick a random guy when I was online and I kicked you for abuse? I do. You told me you didnt know there was a member on, even though you talked to me and I revived countless of people.
And that one time on Jail where you also did it and say there was no members when me and Seera was there? Yeah. That was me who kicked you too.

Vdou, i know you enough to be sure that you would have taken a screenshot of this.

I was pretty upset when you slayed me. If you had taken your screenshot a little above, everyone could have seen me saying "not to kill me". I did have a full kit but it was not on purpose. Indeed, F4 is binded to full kit and F5 is binded to RTD. I pressed F4 accidentally and i received a deagle, i then pressed f6 in order to noclip myself and i went directly into the gunroom to drop my weapons. You slayed me immediately even if i was already in gunroom. When i tried to explain you the situation, you simply said "i could ban you for this", shouting at me without even reading my explanation.


I did talk about this to another admin/member (can't remember who though) and he told me that instead of noclipping inside gunroom i should have empty the deagle.

You don't even remember the cause of the slay and you bring those facts in my application, concerning the "random guy", Evil homer and you were here. It was a player spamming an other server ip and i did forgot that there were members on the server. I already apologized and i did learn from my mistakes by calling a member/admin whenever the situation occured.

I don't remember kicking a player in jailbreak though when members are connected.

Neutral :
Never commands in Jailbreak ( since you are way more active in Jailbreak then Zombie)
Never talks in the server.
I saw you sometimes abusing VIP like slapping people to death.
Not very known.*

Con's :
Trolls from time to time
Age*: Even though you are 18 sometimes i see immaturity coming from you like when you get freekilled you completely whine the whole time.
Not very known*: It's a big con if people don't know you get yourself more active and try to talk more in the servers.

Conclusion: I have to give you a NO my friend you are way too new (just joined 15th of april on forums).

Goodluck.
"Never look down on anybody unless you're helping them up."

- active
- mature
- he communicate a lot

I dont know you from zombie server. I saw you few time's but you are not oldschool.

He used to rape people in TTT xD, Of course this is imature ^^

Well i'll give you a yes for so many reasons, my friend

So, Good luck in your application

That's against the rules.

I'd recommend not doing it if you're serious about getting membership (and not at all as it can lead to VIP removal).

In general, I find you too new to the community and to be too quick on the application. Also, your activity on Jailbreak is higher by 80 hours than your activity on Zombie and I'd rather have you apply for the server you play the most on even if there are more moderators there. You are expected to play the most where you apply / the team you're in and this isn't the case atm.

I'd take more time if I was you, good luck though.

That's against the rules.

Did i acknowledge the fact ? I never slaped someone to death, i think i took like 5 hp from someone so far but i apologized immediately.

Yo Flath. I know you for almost a month now and you're a very nice guy. Here are my pro's and con's. This is al what I can think of now. Maybe i'll edit later.

Neutrals:
- Trying too hard. For some points I have to agree with Jellow. What i've noticed from you the last month is that you're a very social person, but I think you're trying a little bit too hard. You want to be part of almost every discussion on the forum. I don't know if thats a pro or a con. It shows that your dedicated to the community but it can also a bit annoying, like there he is again.

Cons:
- The only con I can come up with now is that you're very new here. I suggest to slow down and give it another shot in a few months. You have the potential and I think you're a good candidate.

Conclusion
Yo Flath. Like I already said you're a very nice, friendly guy. Good thing you joined nD. But for the apply I would give you a Blank/No for now.
"Gisteren is gisteren, vandaag is vandaag"
Top

Humm wrote:Hello there Flath! I didn't expect you to apply for a position in the zombie team. Don't see that as a con because I would myself want to see you as a zombie member. You're quite Active aswell as a mature person. You got the age at your side, your English is perfect, and you're a social person in-game. I'll give you a YES.

I totally agree with Humm but the thing Is you just need some couple of months/weeks of playing and let the players undestand the real you. Because I know you could do this.
This application might get extended hope so. So maybe next time you apply you get accepted!
Good luck Mate!
Last edited by Vato on Mon Jun 02, 2014 6:31 am, edited 2 times in total.
Top
Locked
52 posts