Latley I've been playing on a server from ArticGaming, which has the votemod. Votemod is basicly everything, before every mapvote you vote for what mod you want which looks like this
Spoiler! 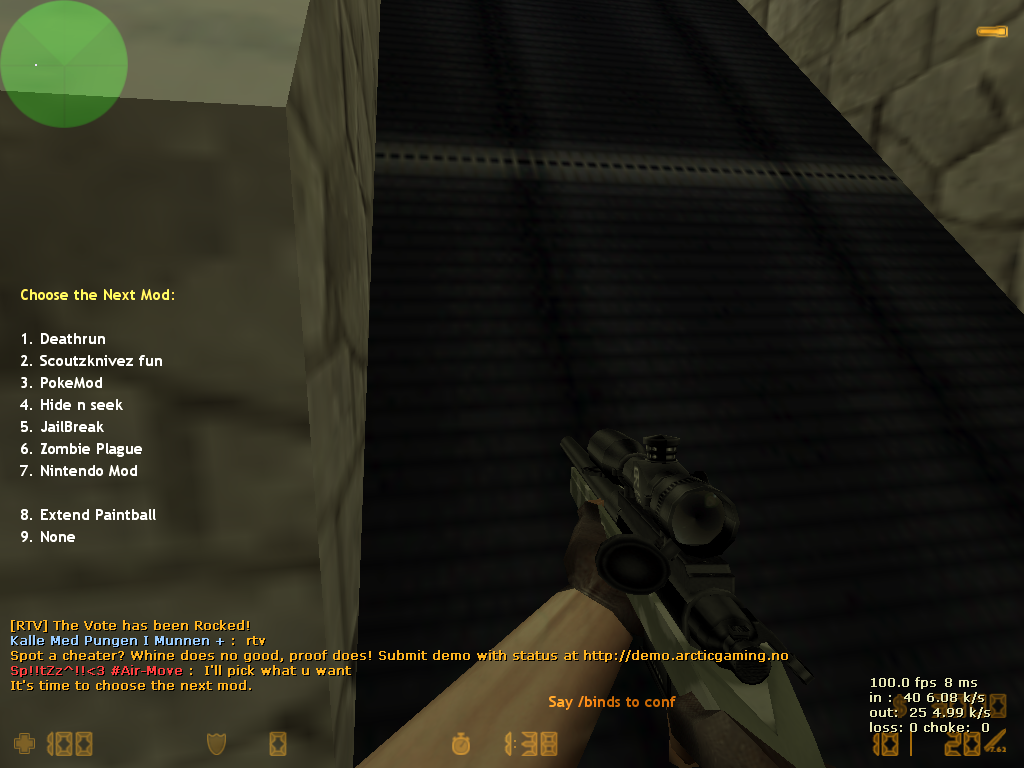 Then when that vote is finished and a mod has been chosen, let's say the winning mod was deathrun, then a map vote will appear with only maps from deathrun (will be like this to each mod that maps that fits too that mod appears on the map vote) as you can see at the picture it's 7 different mods, but you can add others too.

I suppose most of the nD players knows what the CS mod "deathrun" is since neonDragon had their own deathrun server, I will explain it anyway. In the mod Deathrun the Counter-Terrorist's (CT) are supposed to finish the map while the Terrorist's (T) are releasing the traps they got, when the Counter-Terrorist(s) have finished the map they got the chance to get a gun, or they can leave it. Then their job is to kill the T(s) that tried to kill them earlier. When the T or all the CTs are dead, the round is over.

Scoutknivez is kinda like the regular counter-strike(CS) mod which is aim, but here you're ONLY weapons are the scout and knife. The point of this mod is like all the others, to kill the enemies and win the round.

Pokemod might be new for this community, it's a mix between Superhero, aim and a little bit Wc3 in this mod you get to choose ONE pokemon the first time you join, then you can level it up by killing/enemies/defusing the bomb/planting the bomb, just like the pokemon games and show your pokemon can evolve and get stronger, you can have with you a maximum of 7 pokemons. How to get other pokemons you're wondering? You can buy one the beginning pokemons (Pikachu,Squirtle, Bulbasaur, Charmander, Meowth) for 16000$ or you can find pokemons in the enemies spawn or catch them, you can buy different balls, stones, items etc at Pr.Oak
Spoiler! 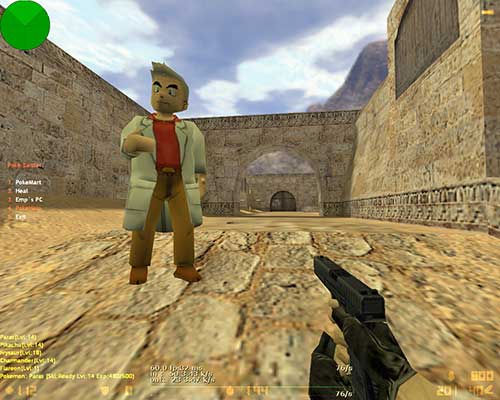 at Pr.Oak you can heal, buy things from the mart, put your pokemons into a "bank" or a PC, like the games sais. Most of the time you kill an enemy he will drop a item, and you can catch hes or her pokemon that he/she is using. Each pokemon got different powers, like teleport to a damaged enemy, x-tra speed, more nades. Here is a video about this mod :
Spoiler!

In this mod the T's are supposed to hide from the CTs, the Ts only got 2 flash, 1 smoke (Freeze) and a HE nade. While the CTs only got their knife, this mod is really popular in CS since you can play it on every map(with blocks) and no-block which can be played at spesific maps made for HnS. If the CTs kills all the Ts they switch side, CT>T, T>CT. If the Ts win the round they stay T, so there won't be any switch.

Keep in mind that this is just a few examples of which mods you can have!

As you can see votemod is like SEVERAL other mods in ONE server. It would be alot of variation, and I think it would attract alot of players since it's really rare to find a server like this.
Top

I like Deathruns even to I am bad on it. I never tried out Hide n Seek but i saw other plays it and it seems good. but scoutknivez and the last one I never played ro saw :p but ya dr would be nice. so yes
Top

i am a huge fan of deathrun and hide and seek.
The pokemod and scoutknivez seems really interesting also.
+1

The question is.. could it handle it?

These users thanked the author Starzy for the post:
Jellow

It's called multimod not votemod

These users thanked the author East Clubber for the post:
uhu

Maybe we should have this as a weekend party server for a couple of hours on saturday and sunday.
Top

Often thought it would be a cool mod.

would only agree if you can choose soccerjam too

it's a nice idea spitzz

I agree, but I have some points to raise with that aswell.

1) There are 2 relatively new servers, assault and de_dust2. The former is doing well (in my opinion), but the latter lacks players (badly so it seems). Why not try to make those popular first before adding new servers. On the other hand, one could argue that having a rare server like this might draw new players who in turn will populate the other servers too. Knowing nD, this is probably the way people think, but you can't forget that you can not count on this to happen(!). No beef, just looking at it from an (in my opinion) realistic viewpoint.

2) Lack of members. With adding a new server like this, you would need an exponential growth of the team aswell. At the moment, I don't see that happening in the near future.


Don't get me wrong, I like the idea and I would support it. Just don't expand too rapidly and not be prepared for the possible consequences.

Looks pretty cool. It can kinda replace the old funserver

QuickSilver wrote:1) There are 2 relatively new servers, assault and de_dust2. The former is doing well (in my opinion), but the latter lacks players (badly so it seems). Why not try to make those popular first before adding new servers.

I think that this should be done at dd2 server at weekends. Not in a NEW server.
Theres a couple fucking junglecats out here..
I live to kill and kill to live.

QuickSilver wrote:1) There are 2 relatively new servers, assault and de_dust2. The former is doing well (in my opinion), but the latter lacks players (badly so it seems). Why not try to make those popular first before adding new servers.

I think that this should be done at dd2 server at weekends. Not in a NEW server.

Having a server like this only in weekends wouldn't let new player come, it would be exclusive and only people here on the forum would know about it and join it. Even if new players came during that weekend they would pretty much don't understand anything when the fun new server they found suddenly is a dd2 only server.
Top

Well im talking about Uhus idea to have this at weekends. So then it doesnt matter. Cos if you make a new server for this they will wonder at week: why isnt there anything in here..
Theres a couple fucking junglecats out here..
I live to kill and kill to live.